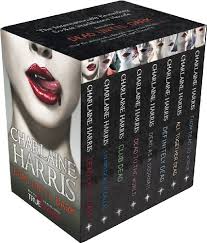 Stacey Storch is a reader and lover of books. She’s not a writer, editor, or publisher, and she has no agenda other than reading a damn good book. As such, it’s her opinion (and that of the silent majority of readers like her) that I’m particularly keen to hear.

This is her perspective on e-books:

I use to be one of those people who, when the topic of e-books and e-readers came up, would shudder in horror and hand-to-heart swear: “I could never read books … ELECTRONICALLY!” *theatrical gasp*. And at the time, I was being perfectly sincere (and a tad snooty, if I’m being completely honest). But two things happened that would irrevocably change my opinion on all things digital.

The precursor was my new addiction to several paranormal themed series such as The Sookie Stackhouse Mysteries by Charlaine Harris and the Anita Blake, Vampire Hunter series by Laurell K Hamilton, with just these series alone quickly filling up what space I had left on my bookshelves – not to mention all the books people kept randomly giving me. My immense love of books was now at war with the available storage space in my house, and as building a library wing as an extension was out of the question, I started to cast around for other options.

Almost as an omen, it was around this time that Apple had announced the launch of the iPad. Now, I am an unashamed Apple fan – I’ve already worshipped at the alter of Macbook, iPod, and iPhone, so it was a natural progression, really. This was all I needed to fall into the e-reading world.

When my iPad arrived, I quickly jumped onto Apple’s iBooks app to check out what I was getting into. But to be honest, I was very disappointed. At the time of launch, iBooks was only stocked with the standard classics**, without even the glimmer of mainstream fiction, let alone anything paranormal-themed. As a result, I went searching through the App-store and found two promising e-readers – Kindle and Kobo (sounds like a children’s show, doesn’t it?).

Kindle quickly became my go-to e-reader. It was easy to use, had a neat button that took me straight to the Amazon Kindle store, books download in about a minute, and I already had an Amazon account. E-books are also AMAZINGLY cheap on Amazon, and in some cases, FREE!

There are a couple of problems with Kindle, though. The main issue has to do with the way the Australian publishing industry negotiates the release of books to Australian consumers on Amazon. Apparently, Amazon has to negotiate the terms for each individual book with the Australian publisher, and as a result I was able to get books 1,2, 4 & 5 in a series, but book 3 was not available. I came across this problem multiple times, which lead me to turn to Kobo as my back up reader.

Kobo is Border’s e-reader, and in terms of look and feel, it is pretty much the same as Kindle. The key difference between Kindle and Kobo is actually in the source stores – Amazon and Borders. Borders tends to be a little more expensive than Amazon, with not as many free titles. But what I couldn’t buy on Amazon, I could buy on Borders.

I do miss the sensation of holding a dusty book and curling up on the lounge for a good read (curling up with a hard slab of steel and glass just isn’t the same). However, I am now reading more, spending less (per book), and helping to save the planet (less trees), which is a big positive in my book. And if ever the need does strike, I can always grab one of my dog-eared favourites and escape the e-world, which will be ready for me after I’ve had my real-world hit.

** To be fair to iBooks, since my first foray, iBooks has relaunched its Australian store with more titles on sale. However, they are often similarly priced to what you’d pay for a traditional paper or hardback, and therefore, no comparison to the other e-book retailers.

Stacey has nothing to plug except her “own awesomeness”.  😉  As an avid paranormal fiction fan, she recommends Charlaine Harris’s Sookie Stackhouse series, Laurell K. Hamilton’s Anita Blake series, and anything with fangs (yes, even Twilight). The Grand Conversation on ebooks will run here at www.jiraiya.com.au until February 28. If you’d like to contribute a guest blog post, email me at shane@jiraiya.com.au.