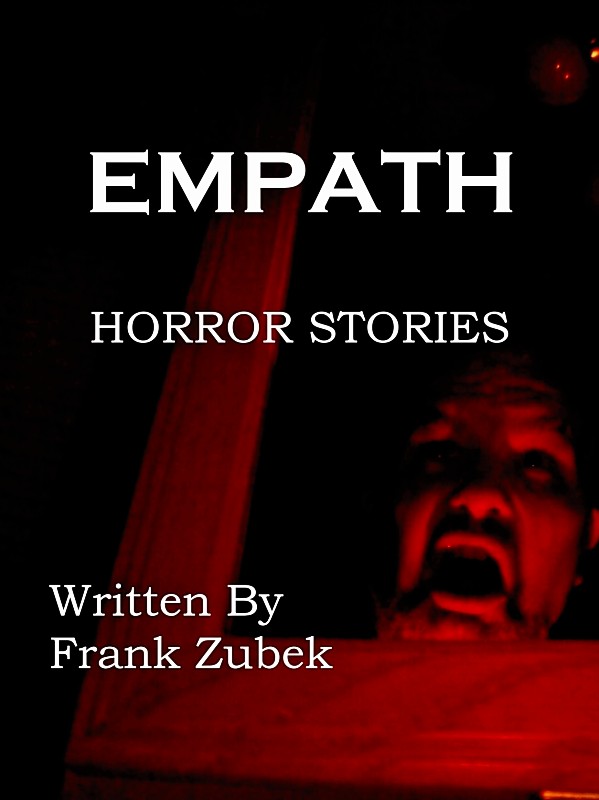 Frank Zubek lives in Ohio with his wife and in his spare time continues to write. Frank is the author of Empath: Horror Stories and A Burning Anger, and he has a short story collection called Belated Regrets on Kindle for 99c but whoever wants a free copy of it just needs to contact him at frank.zubek@yahoo.com. Book 3 (of  6 ) of the Crowell series is due to be released on March 29, 2011.

Frank contacted me after the ‘Grand Conversation’ began, and when he shared his story with me, I thought it deserved to be read by a wider audience. Frank has been plugging away at ebooks for almost a year, and unlike the Hockings, Konraths, and Nicholsons of the indie world, Frank has struggled to sell ebooks in large quantities. Here is his journey:

I was thinking that my small contribution here might be useful for showing the other side of the coin since I have yet to bring in the larger numbers in sales that others have.

In 1999, I wrote a novel which was sent to a few agents in New York, one of which called me and considered it for a few weeks. In the end, she turned it down. But I was encouraged by this and went about writing a dozen short stories in the literary fiction genre, many of which were sent off to various literary magazines.

I’d send something off, and while waiting for a reply (which usually takes up to six months, if not more!), I wrote something else. This meant that, on average, each story went out at least twice each year, and this went on for ten years.

Rejections came in left and right, though I did manage to get a couple of them published for free on a small-time web pages, and I even sold one to Every Day Fiction for 3 bucks in 2009.

Read that again: we’re talking TEN YEARS of writing till the first sale of 3 bucks.

Then, one fine evening, while submitting other short stories, I had a brainstorm. The thought of a man being accused of murdering his girlfriend popped into my head. The twist of the story was this: The guy blamed a snowman for the crime! I wrote it in two days and polished it up in a week.

Then, despite the fantastic odds against it, I sent it off to DemonMinds in June 2007 and forgot about it (as you should because waiting for a reply is just torture), and I focused on other things. To my surprise, the story was accepted in September and entered in the Halloween contest, eventually getting over 3,500 votes!  Elated by this, I asked if I could submit a series of stories featuring Crowell and they said yes.

I know that that flies in the face of what you should be doing (getting paid), but at the time, I figured that at least I was published and the stories were being read. It was a great morale booster seeing myself in print as well!

Now, the original editor I had worked with was quite generous with his time and was very patient with helping me edit all of my five pieces. I feel bad about it now because I should have taken the time to be sure each piece was fully polished and ready. At any time, he could have reminded me of this and told me to do my homework next time. But I imagine that he thought I had potential, so he stuck with me and helped me out (thanks J. P.).

DO NOT make this same mistake because there is no such thing as reading a manuscript too many times for typos and polishing. I was very, very lucky.

Anyway, the original editor couldn’t continue with DemonMinds, and he found someone to take over, but she ran into some issues as well and had to drop out. There is now a new editor and they got a print version out in 2010 and they have another issue scheduled for 2012.

Now, since I already had two books in Kindle, I took the summer and wrote up four new Crowell stories and packaged all nine stories (the snowman contest entry, the four published stories from 2007/2008 and the four 2010 stories) into a collection I called, Empath: Horror Stories, and released it. That was September 2010.

To date, I have sold 54 copies of Empath.

Knowing it wasn’t wise to sit still, I then wrote a novella -length piece with the same characters called A Burning Anger and released that in October.

Even though both Empath and Anger were available on Amazon, I had to let people know that it was available. And the tough part about being independent is that YOU are the marketing department.

YOU have to go out and set up blogging tours.

YOU have to keep the blog or webpage updated.

YOU have to handle bad reviews (Tip – just leave it alone).

YOU have to keep track of the accounting.

YOU need to keep up on the news in the literary world (especially with e-publishing).

YOU have to be your own cheerleader during the bad days.

… as well as find the time to work on the next book.

Now, it’s not all that bad.

This year, a full three months since it was released, I have seen sales on A Burning Anger start to pick up, so I can only assume that the people who bought Empath liked it enough to buy Anger (it helps that I have an Amazon link at the back of the book as well as a link to my blog which keeps people updated to all the news about my work).

The bottom line is: How dedicated to this are you willing to be?

You have to spend some time on the day job as well as with your significant other, play with the kids, feed the dog, cut the grass, dental appointments, etc.

Remember: The better you write means the sooner you can get a book into the e-marketplace and make money.

And consider this: (And your numbers may vary) If I had submitted Empath to a “real” publisher in September (considering they would be happy to publish 130 pages of short horror stories from an unknown writer from Ohio) using the old method of sending out ten envelopes with stamps, I’d more than likely still be waiting for the first few rejection slips.

In addition to that—even if a publisher were to pick me up- I’d get the advance and the contract and yet I’d still have to wait until next year (2012) because the book has to get proofed and placed in the publishing schedule, printed, and shipped out to stores. Instead, I have sold 54 copies of my book and it is being read by people around the world. Granted, it’s just 54 copies in 6 months whereas there are other Kindle writers who are selling thousands of copies every month.

But that’s the business. Can you handle it?

ALSO:  You need to learn the basic computer techno-babble in order to format your books so that they can easily be submitted to Kindle as well as other applications. I’d also suggest really doing some homework on finding a good cover artist for your work so that you don’t overpay for a cover.

I had to do my own cover on Empath, at the last minute, because I got worried during the submission process that the first cover I had done would get me into trouble. It was a field of gravestones and I know many cemeteries have a policy of not using pictures for personal gain (in addition to the privacy issues of the families who might recognize the particular area of the cemetery photographed). So I went into my bathroom and took a self-portrait in my bathroom mirror with the finger over the flash. Then, I went into a free self-publish software site online and darkened the photo even more. I used that as the cover.

The one huge advantage to this self-publishing stuff is this: Instead of submitting countless envelopes to publishers and then waiting and waiting and waiting for months on end for rejection slips, you can format the book with a cover and submit it into the Amazon machine and almost immediately begin to see sales. But then, if you haven’t done your homework, you’ll find out pretty quickly just how good of a writer you are compared to others in the same genre. To some people, it can come as a great payday or an embarrassing crash and burn.

I have had two e-books available on Kindle since April 2010, and I added two more in September and October. I currently average ten sales a month between all four e-books and this month, a full seven months later … I will have sold my 100th ebook. So, on the one hand, it took from 1999 to 2009 the old fashioned way using envelopes, stamps, and a lot of typing to make 3 bucks. Then, switching to e-books, it took me from April 2010 to February 2011 to sell 100 units. Not exactly the kinds of numbers that allow someone to put in a two-week’s notice, right?

In the meantime, there are other authors out there making several thousand dollars each month (but only after similar struggles). Why do I hang in there? Perhaps because I can’t sing or dance. Either way, good luck to you all. You’ll need it.

Frank Zubek’s ebooks (including Empath: Horror Stories and A Burning Anger) are available from Amazon and Smashwords. The Grand Conversation on ebooks will run here at www.jiraiya.com.au until February 28. If you’d like to contribute a guest blog post, email me at shane@jiraiya.com.au.