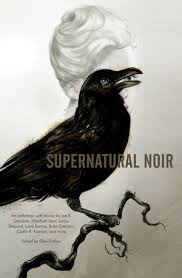 Ellen Datlow is probably the horror genre’s best known and most awarded short story editor and anthologist. She was co-editor of the long-running The Year’s Best Fantasy and Horror series and has edited or co-edited many other anthologies, most recently Inferno, Troll’s Eye View (with Terri Windling), Best Horror of the Year Volumes 1 and 2, Poe, Lovecraft Unbound, , Darkness: Two Decades of Modern Horror, and Haunted Legends (with Nick Mamatas).

Now, after that mouthful, Ellen preferred to tackle her guest post in Q&A form, so here’s her thoughts on e-books and how they pertain to anthologies and short stories:

Have any of your anthologies been released as e-books by their publishers?

I probably haven’t paid enough attention to check, but I do know that Darkness: Two Decades of Modern Horror has been released that way (in addition to print, of course). I think/hope that most of my forthcoming books are being released simultaneously as e-books. To me it’s all the same – I just want my books to sell, any way they can.

What are your thoughts about self-publishing your own anthologies as e-books?

Never — how would I pay the contributors? I believe that I and my authors should get paid advances against royalties.

Have you read self-published e-books? If so, what have been your observations?

I only read e-books as pdf files or word files for the Best Horror of the Year. I don’t buy e-books. I would only buy a self-published e-book if I knew the writer was someone I’d read in print.

Short stories (in collections and anthologies) are typically outsold by novels in bookstores. Do you think e-books could level the playing field?

One can hope, but I’ve no idea.

Looking into the crystal ball, how will the publishing industry be different in 5 years? How will this affect your role as an anthologist?

No idea. I hope I will continue to sell anthologies and that most of them will continue to earn out and pay royalties. Right now, the YA field is far more lucrative than adult in general, but that could change at any time. Some of my anthologies sell well, some don’t. I’d personally like to edit more SF, but I have more luck selling fantasy and horror these days. I don’t think anyone can predict the future in publishing. It’s changing so rapidly right now.

Her vampire anthology Teeth (HarperCollins), the urban fantasy anthology Naked City (St. Martins), and the anthology Supernatural Noir (Dark Horse) – among others – will soon be released.

Ellen will be in Perth (Western Australia) in April as a Guest of Honour for Swancon if you’d like to pick her brain on e-books, horror, short stories, or anything else!

The Grand Conversation on ebooks will run here at www.jiraiya.com.au until February 28. If you’d like to contribute a guest blog post, email me at shane@jiraiya.com.au.