The reviews for Cthulhu’s Dark Cults have been coming in thick and fast! All have been positive, too, which is great because I think CDC is one of the great horror anthologies of 2010.

First up, Matthew Carpenter posted a detailed review of CDC on Amazon that was more than complimentary, although he was somewhat ambivalent about my novella “Requiem for the Burning God”:

… Some mercenaries are hired to provide security at a mine in Peru. One finds out more than is good for his health. This was an action story more than suspense or mystery; as such I liked it but I think the canvas was too broad. First the main character, Max Calder, leads his small band expertly in infantry operations and then he pilots a small plane to attack a ship. After that he is able to use an antiaircraft weapon. OK, this is too much scrutiny for what is actually a fun bit of pulp fiction.

Then, Jeff Ritchie at ScaryMinds has plenty of positives to point out about the anthology, citing “Requiem” as one of his favourites. Of the anthology, Jeff says:

The writers in the collection have really captured the true nature of the Cthulhu Mythos and have managed to twist that nature in a new direction. It’s quite the achievement and the collection really does become a must have for lovers of the horror genre. I’m calling this the best Mythos collection since Brian Lumley’s seminal Titus Crow works.

And “Requiem for the Burning God” gets a mention:

… the stories I would highlight as being the pick of the collection (please note chronological order here). John Sunseri’s “The Eternal Chinaman” gets things out of the harbour in style with perhaps a ‘Dagon’ inspired tale of magic versus true evil. Bringing the nasty into things David Witteveen hits us with “Perfect Skin”. Not to be outdone, Shane Jiraiya Cummings tells a cautionary tale of not diving in without first looking as the protagonists learn in the sensational “Requiem for the Burning God“. A touch of the ‘Boys Own Adventure’ was appreciated there. 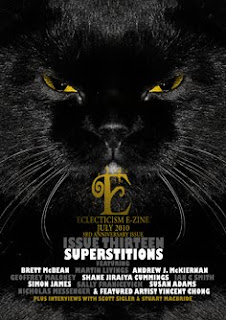 Also over at ScaryMinds is a praiseworthy review of the recently released Eclecticism #13, which contains my story “A Picture of Death”.

ScaryMinds is the most exciting and comprehensive addition to the Australian horror criticism landscape since HorrorScope, and it’s a site that’s well worth your time. Check it out!

Cthulhu’s Dark Cults can be purchased from Chaosium, and Eclecticism #13 may be downloaded (for free!) from Dark Prints Press.

Tags: A Picture of DeathRequiem for the Burning God