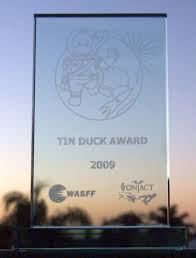 One thing that we concluded at our annual ‘Australia Day by the Pool’ BBQ with various mates of the writerly and editorly persuasion is that writers are massively self-centred. Come to think of it … maybe that was something just I was asserting … but no one disagreed!

With that in mind, it’s that delightful time of year known as awards season, and all the Australian regional awards are now open for entries.

[As an aside, I said ‘entries’ rather than ‘nominations’ because writers too often get confused and claim they’ve been ‘nominated’ for an award when they’ve merely ‘entered’ a work for consideration. Writers please note:  to properly say your work has been nominated, your work has to have been shortlisted as a finalist, okay? Remember, writers = massively self-centred. 😉 ]

If you live in Western Australia, Victoria, or New Zealand, read on …

For West Aussies, the venerable Tin Ducks are now open. For those who don’t know, Ticonderoga Publications, Twelfth Planet Press, Fablecroft Publishing, Brimstone Press, and several ASIM members are in WA, but based on previous years’ results, I have a pretty good idea which press will do well.

Notable WA authors I’m aware of include Martin Livings (with a convenient list of his publications here), Stephen Dedman, Juliet Marillier, Simon Haynes, Dave Luckett, Pete Kempshall, Daniel I. Russell, Craig Bezant, Lee & Lyn Battersby, Stephanie Coxon, and of course, me (although I’m no longer actively participating in the ‘Ducks). Given what I’ve said above, I’m sure there will be list upon list of eligible work appearing on the web.

Marty and Paul, are you taking note? For our New Zealand friends (and expat NZ Aussies), the Vogels are also open for business. I don’t mean to imply they’re a regional Aussie award, but frankly, I’m too impatient to wait until the Ditmars open and include the Vogels in that post, so this will have to do.

All of these awards are popular vote-style awards, so if you liked a particular work (and remember, this includes fiction of all lengths and anthologies, non-fiction, reviews, art, fan works, etc.) get in early and nominate your favourite stuff. If wading through the individual author posts is too demanding, I’d suggest checking out the 2010 HorrorScope Recommended Reading List. Now, there’s some awesome award-worthy stuff on that list. Check it out!