At the beginning of September, I made the difficult decision to resign from my day job. The reason? My writing career is really picking up (as many will note from my frequent bombardings on Facebook) and even though my employers have been absolutely fantastic about flexible hours and whatnot, I ultimately realised that I could no longer do justice to both my employers and my dream of a full time writing career.

I’m a [magazine] editor by trade (yes, I do this both professionally and in my spare time!) and my head was filled with day job stuff most of the time, even after hours when trying to write or edit fiction. It is the great dilemma of doing what you love day and night. The projects blur and the creative spaces get muddled.

So after close to four fantastic years as Managing Editor of Medical Forum, the trade magazine for WA’s doctors, I finish on Monday. There have been highs and lows as with any job, but the magazine (and associated businesses) is (are) run by a small, close-knit team, which has become like a second family. Leaving to pursue full time novel writing should have been an easy decision, but my attachment to the quirks of my colleagues made it surprisingly difficult.

Now, I move onto completing several projects that should have been finished earlier in the year. I have money enough saved to see me writing novels full time for at least the next 3-6 months, and hopefully, longer if I strike success. I’m planning an ambitious writing schedule each day, with a goal of 10k-15k words (minimum) every week.

My works in progress are:

In the Heart of Midnight (collection) – one new story (“Hunting the Angel of Midnight”) needs to be completed and the ms given a final edit, but otherwise, this is ready to be submitted to an Australian publisher that has expressed interest in reading the ms.

Tales from the Sunburnt Realms (anthology) – featuring 12 of the biggest names in Australian SF, this anthology of colonial SF/fantasy stories has been a long time coming, but with a bit more editing, will be submitted to an interested publisher.

Phoenix and the Darkness of Wolves (novella) – working through final edits! Expected to be published as a standalone book by Damnation Books in December 2009.

Paranormal fiction trilogy – synopses have been written, plots plotted, and book 1 has been started (and a particularly dark, non-vampirey story it is, too!), but I’m hoping to complete it somewhere between Yamabushi Kaidan Book 2 and Chasing Jormungand (hopefully, before the paranormal boom goes bust!).

As a magnificent gift to send me on my way as a full time author, my very generous employers and friends commissioned this caricature from Rod Cameron, a cartoonist who has done some work for Medical Forum. I have a giant, framed version sitting over my computer in the study, which will hopefully inspire me as I write. Here it is: 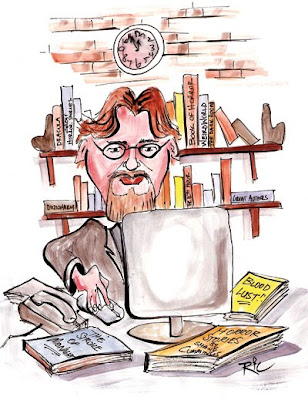