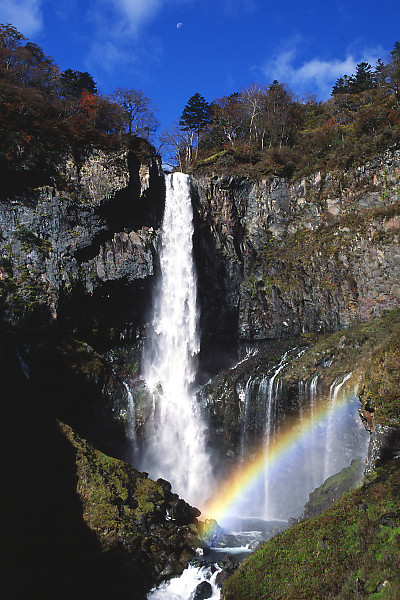 Kegon Falls is one of those rare places of natural beauty in Japan, but its real mystique stems from its reputation for attracting suicides from Japan’s lovelorn youth.

I know a bit about Kegon Falls as the area is featured prominently in my novel-in-progress Circle of Tears. The falls are the headquarters of the titular villains; their leader Sentoryu Hachiro maintains a huge palace that is only accessible through the mists of the waterfall. Therefore, I’ve spent some time researching the falls, which is where I discovered their dark history.

The most notorious suicide was that of heartbroken poet Misao Fujimura, who before plunging the 97m to his death in 1903, wrote a poem on a tree trunk:

Delicate line between heaven and earth …
The calm of the ages,
all the world’s worth.
Such miniscule measure,
while we think it so grand …
Just five flecks of smallness,
this soft quiet land.
So frail and so fleting,
in the end you will see
Simple dreams were Horatio’s philosophy.

For all truth,
all creation,
all secrets of yore
Can be told in an instant,
but then they’re no more.

Ah, The Unexplainable
All worries unsettled,
heartache unresolved …
All questions unanswered,
with death, shall be solved.

We already teeter,
this sheer cliff so high.
When we fall to corruption,
insecurities die.

To end is to start;
to surrender, to know.
Despair and depression,
together they grow.
Hope shall meet hopeless
when there’s nowhere to go.

I’ve spent years trying to capture despair in my short stories, but I don’t think I’ve seen it memorialised so succinctly.